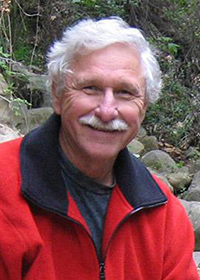 Edward Keller is one of the foremost experts on tectonic geomorphology especially with regard to earthquake reduction and prevention. By studying relative uplift and subsidence both in terms of rates and elevation changes, tectonic movements and their extent and intensity may be revealed. The beautiful wave cut terraces of the California Pacific coast are excellent examples of the types of features that Keller studies. They reveal sequential tectonic uplift of the land surface with erosion during the quiet periods. Such studies can reveal information on recurrence intervals for earthquakes, potential for blind faults, as well as landslides and other hazards. They have great implications for building codes and disaster preparedness plans.  Keller primarily studies the geomorphology and Quaternary deposits related to active faults and folds that result from faults.

Download the eBook: "SANTA BARBARA - Land of Dynamic Beauty - A Natural History" by Edward A. Keller and Valery R. Keller

Edward Keller also has a major interest in fluvial geomorphology. He studies the development of channels in streams as well as the controls on where pools and riffles develop and how they change with time. This research involves an attempt to explain and even quantify a process that is otherwise chaotic in appearance. In addition to determining location of the features of a stream, Keller studies the processes involved in to flood control. Currently, as an offshoot of this research, he has been studying the hydrologic processes in the chaparral ecosystem of southern California and role of wildfire in the recurrence of high magnitude flood deposits and debris flow deposits.

Edward Keller has over 20 years experience in public service and consulting in a variety of subjects and cases including:  flood hazard; erosion; coastal processes; landslides; and landscape history. This work has provided real world experience to both undergraduate and graduate students. He earned a Ph.D. from Purdue University, Indiana in Geology in 1973. He joined the faculty at the University of North Carolina the same year. In 1976, he accepted a position at the University of California at Santa Barbara (joint appointment with the Environmental Studies Program and the Department of Earth Science) and has remained there ever since. He has served as Chair of both the Environmental Studies and the Hydrologic Science programs several times. Edward Keller has had a very productive career. He is an author on some 100 articles in international journals, governmental reports and professional volumes. Many of these are seminal works on fluvial processes and tectonic geomorphology. Even more impressive are the books that he has written. He is the author of the most successful textbook on Environmental Geology (with the same name) now in its eighth edition. He also wrote the definitive textbook on tectonic geomorphology entitled Active Tectonics and is in its second printing. He is the author with Daniel Botkin of a very successful textbook on Environmental Science (with the same name). He is also an author on two other books on Environmental Science and Geology. Keller has received several honors and awards for his contributions to the profession. He received a Hartley Visiting Professor Award from The University of Southampton, England in 1982-1983 and the Quatercentenary Fellowship from Cambridege University, England in 2000. He two Outstanding Alumnus Awards from Purdue University, Indiana, one from the department (1994) and one from the School of Science (1996). He also received a Distinguished Alumnus Award from California State University at Fresno in 1998. He received the Outstanding Research Award from the Southern California Earthquake Center in 1999. Professor Keller received the Don J Easterbrook, Distinguished Scientist Award from the Geological Society of America in 2004.

Environmental and Engineering Geology, and Geomorphology

Dr. Keller's research efforts are divided into two areas of surface processes: 1) study of stream and river form and process 2) studies of Quaternary stratigraphy and tectonics as they relate to earthquake hazard, landslides, active folding and mountain building. River studies focus on: 1) Basic river processes associated with channel form, sediment sorting and routing, and sediment budgets; 2) The role of wildfire and the recurrence intervals of high magnitude flood deposits and debris flow deposits; 3) Role of large woody debris and other large roughness elements on channel form and process; 4) Environmental effects of channelization; 5) River restoration and management; 6) flood hazard evaluation; and 7) Understanding of ecologic factors associated with the  habitat for the endangered southern California steelhead trout.  This work has been mostly funded by the Water Resources Center at the University of California, Riverside. My research in active tectonics has centered on the western Transverse Ranges of southern California.  The objectives of that research are: 1) Establish the late Pleistocene through Holocene chronology; 2) Estimate rates of recent tectonic activity; 3) Determine the basic tectonic framework of the western Transverse Ranges; 4) Provide a better understanding of mountain-building processes in active fold-and-thrust belts; 5) Understand fault and fold growth, particularly lateral propagation 6) Understand the earthquake hazard of the Santa Barbara area; and Understand the La Conchita landslide hazard. Funding for active tectonic studies has come from the U. S. Geological Survey’s Earthquakes Reduction Program, the Southern California Earthquake Center, and the National Science Foundation.

Dr. Keller is currently working on research that measures coastal erosion rates before, during and after El Nino (LiDAR).