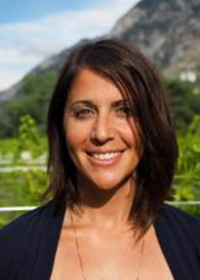 Mona Damluji is Assistant Professor of Film & Media Studies at the University of California, Santa Barbara and a Peabody and Emmy Award-nominated producer of the short documentary series The Secret Life of Muslims. Her teaching, research and creative work engages underrepresented media histories and cultural studies of oil, urban space and infrastructure with a focus on the Middle East and its diasporas.

Mona’s current book project Pipeline Cinema is a history of how multinational petroleum companies shaped local cultural norms and global popular imaginaries of oil and the Middle East through film and media sponsorship in the twentieth century.

Mona is a co-curator of the traveling exhibition Arab Comics: 90 Years of Popular Visual Culture and Multitudes: An Art Exhibit after #muslimban. Her publications appear in Urban History, Comparative Studies of South Asia, Africa and the Middle East, International Journal of Islamic Architecture, Subterranean Estates: the Life Worlds of Oil and Gas, Ars Orientalis, MEI Insights and Jadaliyya.

Mona is a co-convener of the IHC Research Focus Group on Re-centering Energy Justice for AY 2019/2020. She was a co-PI of the UCSB Mellon Sawyer Seminar on Energy Justice in Global Perspective for AY 2018/2019.