50 years of Hope and Action

It was 50 years ago when Santa Barbara experienced the worst oil spill in U.S. history up to that time. The University of California, Santa Barbara was within sight and smell of the littered channel and its beaches.

Until that point in history, the world of academia had not yet realized that it overlooked a very important aspect of educating students on how to care, respect, and develop a framework to protect our fragile world. 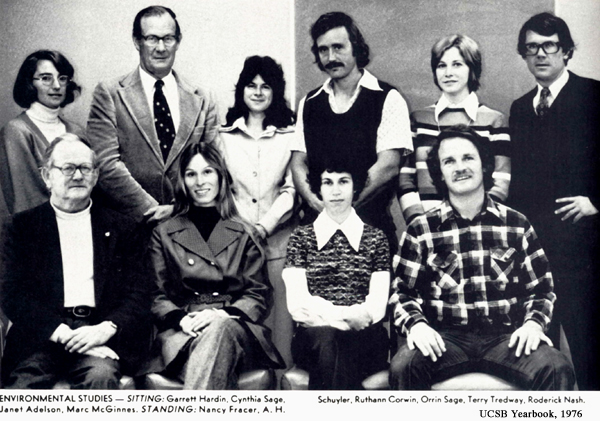 But this all changed just a few weeks after the spill when on February 18th, 1969 a group of twenty-one faculty, calling themselves The Friends of the Human Habitat, met to discuss the possibility of promoting some form of environmental education at UCSB. The members of the ad-hoc committee were geologists, geographers, engineers, biologists, an economist, and a historian. By the fall of 1970 the Environmental Studies Program at UCSB was established, one of the first of a new breed of educational programs in the country. It was set up as a multidisciplinary program drawing on the strengths of many fields and providing a generalist approach to complex environmental issues.

50 years later, the Environmental Studies (ES) Program still holds true to its goal of a comprehensive approach to education while simultaneously evolving and adapting to meet the challenges of an ever changing world, both academically and environmentally. The first graduating ES class in 1972 had only 12 students. In 1980 the total number of graduates rose to 871. Today, with more than 850 enrolled students and over 7,200 alumni actively working to preserve and protect our environment, the ES Program at UC Santa Barbara is considered one of the oldest and most successful undergraduate environmental programs in the world.

Building a Movement: 50 Years of Environmental Studies at UCSB

News Articles and Publications Relevant to the History of Our Program:

History of Environmental Studies at UCSB:

Impacts of the Santa Barbara Oil Blowout of 1969